Hi everyone! It's DT Randy and on today's blog I am super excited to share the first project I made using the newest release that is now in the shop! I am highlighting the new Slimline Porthole Dies and featuring two of the new stamp and die sets.
Sets used:
I first took the largest slimline die from the Slimline Scalloped Trio Circle Nesting dies set and cut it out of white cardstock twice. I then took the slimline porthole die and cut it out of one of the slimline panel. I love that all three portholes are connected together so you don't have to eyeball each one and can cut it out all at once. I then blended Pumice Stone and Hickory Smoke onto the porthole panel and splattered white water color over it. I wanted to get the color of a distressed submarine.
I then took the second slimline panel and placed it underneath the first with the portholes. I took a pencil and traced the circles so I knew where to stamp the scenes. I wanted to create a scene from top to bottom. So have the beach at the top and then slowly go down to the bottom of the ocean.
For my top circle, I stamped the beach scene from the Beach Buds set. On the last panel, I stamped the underwater scene from the Fintastic Friends set. I then stamped out the crab from the Beach Buds set and the whale and octopus from the Fintastic Friends set. I fussy cut them out and used the following colors for the images:
I then took the Hello die and cut it out of gold cardstock. I took the two sentiments and heat embossed it onto teal cardstock and cut it out using the coordinating banner cuts included in the set. I love that these are included as it allows us to cut out the fun wave shape the sentiment is in. I then assembled all of my elements using liquid adhesive. To finish off my card, I wanted to give it a seaweed look stuck on the submarine so I had a texture die in my stash and blended Mowed Lawn, Twisted Citron and Forest Moss. I adhered it onto my slimline and trimmed it down.
I hope you love the new sets and enjoyed this tutorial. If you liked any of the new sets that I used in this post, don't forget to use the code T4TRANDY10 to save at checkout. Happy crafting!
Posted by Randy at 14:00 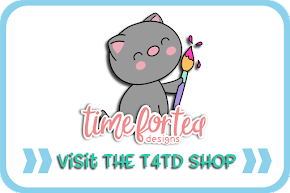